From the getting-old department.

Luckily, our university had some other kindred spirits who understood our palette as — ahem — precisely as we did. We got the lucky chance to produce Atreus Dawn, with a genuine budget, on a genuine stage, in Providence, RI. It looked a little like this: 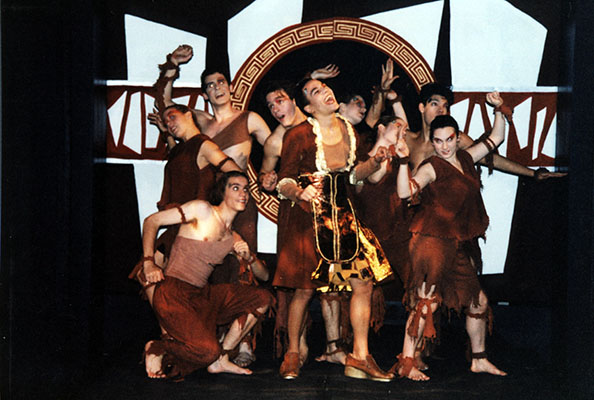 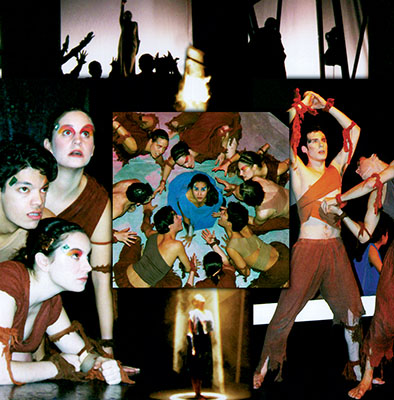 There are a few things I remember fondly. The stark geometry of the set and lighting, coupled with the spirited Greek chorus and relentless direction, propelled the show through its dark terrain. But some of my favorite moments were just plain inexplicable, like when two-year-old Orestes sang an (intentionally atrocious) Barbie Girl number about his future kingship while the chorus transformed the stage into a rave hall.

We pressed far too many CDs, so I also remember standing with Georg near the Alamo sculpture in New York, trying to pawn off our wares on unsuspecting passerby. Who was the Manhattanite that, when confronted with our free techno-musical-on-a-platter, bellowed “I don’t want any of your Jesus crap!” as he stormed away? In a fit of reverse kleptomania, we also snuck a dozen or so CDs onto the shelves of the nearby Virgin Megastore.

What’s left today are some goofy photos, good memories, and, of course, the music. We’ve placed the full cast recording under a creative commons license. I’d say “enjoy,” but I’ve heard the music, so instead I’ll just wish you Godspeed.