It has been a year since my good friend Erik Hunter died of cancer.

Erik played the trombone with my jazz quintet – now, alas, a quartet. He also directed the Cascadia Jazz Big Band, an extremely talented and fun group of musicians here in the Seattle area. I miss his trombone’s sorrowful tones and his somewhat embarrassing taste for cheesy Bossa Novas.

If music was half of Erik’s life, biking was the other. In 2006, when I undertook the Seattle to Portland bike ride, it was Erik more than anyone else who encouraged (okay, forced) me to keep up with my training. I can’t count the number of Saturday mornings he called at 6AM and said “dammit, if you’re not on the trail yet, how are you and I going to to get 100 miles done in time for drinks?” 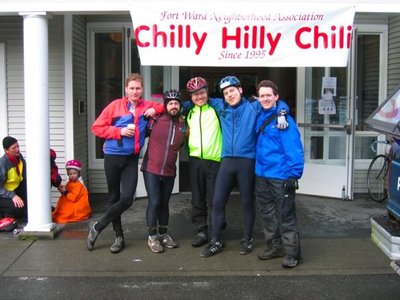 Erik, Me, Brent, Andrew, and Ian after a cold and wet bike ride around Bainbridge Island

In addition to being downright disrespectful of my weekend sleeping habits, Erik had a knack for mooching food whenever possible. If I brought dinner to Wednesday night jazz practice, Erik generally yoinked half of it while I wasn’t looking – unless, of course, it was fast food. He held his nose up at that.

One Wednesday night in early 2008, Erik came to jazz practice but sat it out. He said he was unusually short of breath. A week later, Erik said he had coughed up a little blood and didn’t feel terribly well. We encouraged (okay, forced) him to go see a doctor. Two weeks after that, Erik returned with the news: he had an unusual form of cancer that had already reached Stage IV. It had metastasized and spread just about everywhere in his body. There was apparently nothing that modern medicine could do.

Things moved quickly after that. The next time I saw Erik, he had to use portable oxygen tanks. I drove him to the Safeway to pick up a few things. When he caught a woman staring at him and his tanks in the checkout line, he turned around and barked in the sarcastic way that only he could muster: “What, you’ve never seen a dead man before?”

A few weeks later when I visited, Erik was bed-ridden. He had good care in his house and friends were visiting round-the-clock. But he was already clearly weak. We listened to his favorite latin jazz recordings and he told me something I’ll never forget, so out of character was it for him: “I’m okay with it now. I’m going to die. The world won’t miss me and it will get along just fine without me. In fact, I guess that’s the tragic secret to life. Each of us dies in turn, and it doesn’t matter. But somehow the whole game of life keeps moving forward.” Later he added: “Oh, if you see any religious types heading my way – turn ‘em back. I’ve got no need for that bullshit.”

Two weeks later I saw Erik for the last time. He didn’t answer when I knocked so I walked in to find him sleeping. I woke him up to say hi. He looked confused. We talked for a minute or two until his nurse arrived. Erik immediately sat up, pointed at me, and shouted. “This man has been in my house. He keeps talking to me. I don’t know him. Get him out. Get him out!” He looked terrified. The heavy dose of pain-relieving drugs he was taking had made him disoriented. At the nurse’s request, I left – a little shaken.

Erik’s funeral was exactly as it should have been. We gathered at the local church where his big band practiced. After saying a few words about Erik, most of them sarcastic, his band played for several hours. Our quintet also played his favorite tunes. After the service, many of the musicians stayed on to hold a late-night jam session.

This Saturday we’re going to get everyone together again to remember Erik. There will be music, food mooching, and Alaskan Ambers. I only wish he would be there to help us keep the party going.